Famous Cars of the Big and Small Screen Part 2

As a follow up to the last blog about famous cars here are some more cars that have been stars of film and TV over the years. 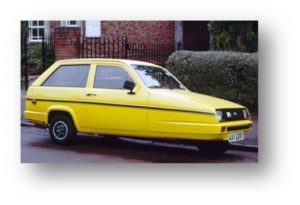 This little three wheel car was first built in the early 70’s. It was originally designed to be able to be driven and taxed on a motorcycle licence. During the 70’s fuel crisis they gained popularity for the savings the produced in terms of tax and fuel economy. A variant of the Reliant, the Reliant Regal is widely recognised as the car driven by the two brothers, Del Boy and Rodney, in the television show Only Fools and Horses. The car also featured in the Mr. Bean series being crashed into, pushed and bullied by Mr. Bean in his Mini. 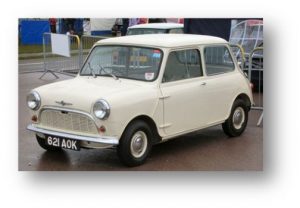 The mini has been around since the late 50’s and is still being made today . It’s been a British Icon for decades. It was voted the 2nd most influential car of the 20th century just behind the Ford Model T. It has starred in several films including The Italian Job both the original and the remake, The Bourne Identity, Austin Powers and Mr. Bean. 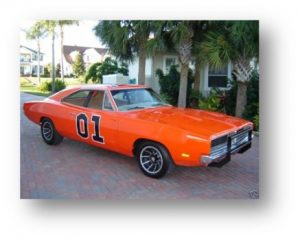 The Dodge Charger was first built in the mid-sixties and continues to be produced today. It has been included in countless movies and television shows over the years. One of the most iconic and recognisable Chargers is the one from The Dukes of Hazard known as The General Lee. Famous for its colour, confederate flag on the roof, long stunt jumps and the welded shut doors, what child of the 70s and 80s didn’t try and emulate the Duke Cousins climbing in through the window of their parents car? A heavily modified Charger was also crashed at the end of the Fast & the Furious movie. 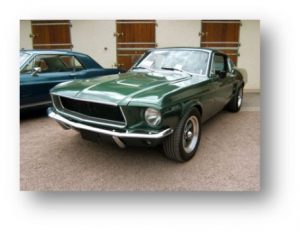 The Ford Mustang is the definition of a movie muscle car. Fast and sleek with a big powerful American made engine, they were a draw for action movies. One of the greatest car chase movies of all time, Bullitt starred Steve McQueen. It features a highland green Ford Mustang Fastback being driven at high speeds up and down the hilly streets of San Francisco. 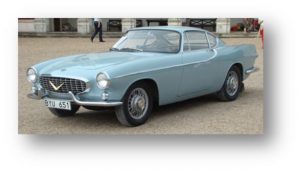 The Volvo P1800 is a two door sports car with a front engine and rear wheel drive. It started production in the early 60s for more than a decade. It was more of a stylish car rather than an out and out sports car. It gained notoriety as the car driven by Simon Templar in the TV show The Saint. 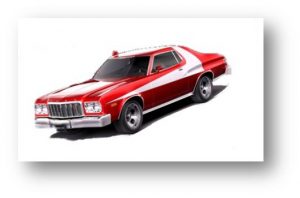 The Ford Torino was made from the late sixties up to the late seventies. The car is well known as the ride of choice of the American cop duo Starsky & Hutch. It was a bright red with a characteristic white stripe. It was nicknamed the striped tomato by David Soul who played Hutch. The Torino is another example of a much loved car which turned out not to be very good. A lot of the cars suffered badly from rust and corrosion.

Check out our competitive car insurance rates today, why not call us on 0818 25 20 25 to speak to one of our customer representatives or go to our website www.kennco.ie to get a quote today.